Arsenal midfielder Granit Xhaka has indicated that manager Unai Emery has yet to decide as to who would become the permanent captain of the club. The Switzerland international has been regularly wearing the captain’s armband with the anticipated departure of Laurent Koscielny but he has now admitted that he has not been handed with the leadership duties for next season. 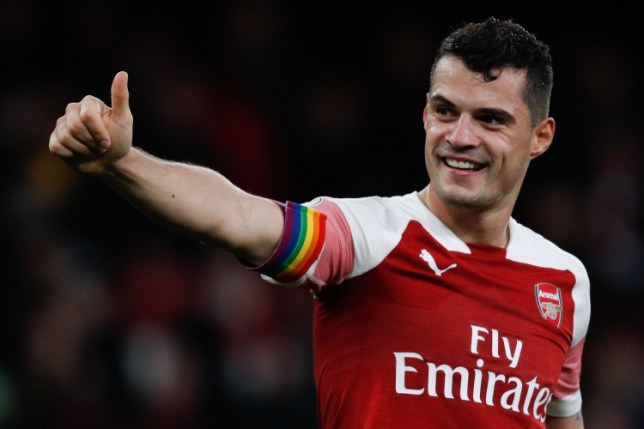 He told the club’s official website: “Nobody has spoken about the captain’s armband. The coach hasn’t decided but if I have the armband, of course, I will be happy it’s something special but in the end, we have to all be captains on the pitch and outside out of the pitch because we need everyone. I think we have had the same situation in the past as well. We played very good but in the end we don’t take anything. We have to learn to concentrate throughout the 90 minutes in future to take something.”

Xhaka was handed the captain’s armband at different stages of the previous campaign and he should have the best chance of skippering the team, considering he is one of the regulars under the head coach. The Switzerland international has been with the Gunners for the past three seasons and the previous campaign probably saw the best of him.

Nonetheless, he still had the tendency to switch off at crucial stages of games and a repeat of the same could put him at the risk of being dropped, considering the added competition with the arrival of Dani Ceballos. Arsenal have already made four signings during the ongoing transfer window with their most recent being the club-record signing of Nicolas Pepe from Lille.

Still, there is the speculation that they could continue with the spending spree with the central defence being the main point of focus. The north London giants have pursued no one to immediately make the difference at the heart of the backline and reports indicate that they are looking into a deal for either Daniele Rugani or Dayot Upamecano.